Maple syrup production goes so far back in American history that no one actually knows how it started, Historians believe the idea that the Indians taught it to the early settlers.  The University of Wisconsin’s Carol L Mason insists that early French explorers or missionaries taught the Indians. She says that the Indians didn’t have the technology or the “motivation” to produce maple syrup.

American Indians were accomplished woodsmen used what they could from their surroundings. They discovered herbs for flavoring food, healing, and poultices, and they discovered tobacco to use in their peace pipes.  The Indians had plenty of motivation to find some variety in their diet and to use what they could to keep warm and survive. Indians tapped the trees and boiled the excess water out, the leftovers were used as a source of energy and flavoring that they could 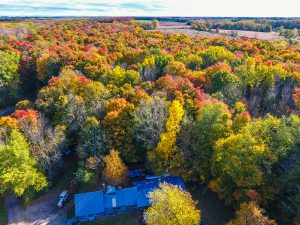 store in cakes to use during the rest of the year. It was called Maple Syrup.

Indians have names for the maple tree and the sugar product. The Algonquin called maple sugar sinsibuckwud. The Ojibway said sheesheegummavvis, meaning ” sap flows fast.” The Cree called the maple tree sisibaskwattick. The Anishinabe of Minnesota can not remember when they started making aninaatig ahfiwaagamizigan (maple syrup).

For centuries Indians have tapped maples, gashed the bark under the tap in a V-shape and put out large birch bark bowls under the tap for collection. Earlier Indians would pour the sap into a hollowed out log called birch bark or clay kettle and drop hot rocks into the cooking vat until most of the water was boiled away. Later Indians would pour the sap into clay or a kettle held over a campfire.

Early explorers wrote about the Indians having three types of maple sugar. “Grain Sugar” was a coarse granulated sugar similar to our brown sugar. “Cake Sugar- was poured into wooden molds to make blocks or rakes. “Wax Sugar” was extra thick sugar that was poured over snow, which is what we simply call “sugar on snow.” Indeed, a few, very old maple trees show indications that the Indians were tapping long before the Europeans touched the American shoreline.

Europeans came to Eastern Canada 300 years ago. They noticed the Indians used a dark sugar with a different taste. This is the first kind of sugar produced in North America. Indians taught the Europeans how to collect the sap from the Maple trees, and the settlers added their own technology to the process. Europeans used augers to bore the holes, made wooden spouts, hung wooden buckets from the spouts, and used kettles to boil the sap.

Maple sugar was a major source of sugar for the French settlers. White sugar was imported and was extremely expensive and hard to get. Through 200 years, Americans boiled almost all of the sap they collected down into sugar.

Starting in the 1860s, a few  developments pushed maple sugar production to its highest level. Civil War soldiers  needed a source of food that wouldn’t spoil during shipment and storage. Sheet metal began rolling out of American foundries, making all sorts of new applications possible. One of the first things was the tin can. The can helped the soldiers, and it was also a boon for sugar makers who could now preserve the syrup to use and sell year-round. Metal pails followed with lids for the metal sap pails was used to keep debris from falling into the sap. D. M. Cook, an inventor, used sheet metal to develop maple sap evaporation pans. Around the same time, another inventor, Eli Mosher, devised a more durable metal spout.

Cook and other sugar makers had made a flat-bottomed pan with baffles and channels in the bottom. With this method the heat from the fire could make contact with a larger volume of sap and boil the sap down much faster. These were the precursors of the modern evaporators.

In 1959 Nelson Griggs invented the plastic pipeline for use in maple sap collection. For twenty years or so developers struggled with various problems with the plastic tubing. By the time of the energy crisis in the 1970s, however, plastic tubing’s problems had been straightened out.

Because of the oil crisis in the 70’s, Canadian and United States agriculture departments focused on energy-efficient production of maple syrup. With the addition of vacuum pumps to the plastic tubing maple producers could now make even slow runs worth the effort to fire up the evaporators. The trees still had to be tapped and the pipeline strung, but the maple producer did not have to enlist an army of gatherers to trudge through the sugar bush and collect the sap from each bucket. The sap from each tap now runs by gravity through the plastic tubing downhill to a collecting tank, ready to be collected and taken to the sugarhouse.

In the 1970s, some sugar makers starting using a process called reverse osmosis. This process separates water from water-soluble solids and can reduce the boiling process in half. Many sugar makers say that reverse osmosis gives an off-taste to the syrup. They’d rather stay with the time-honored method of evaporating from start to finish.